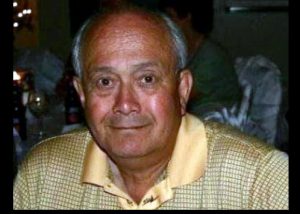 He was born March 21, 1937, in St. Louis, Missouri, to Frank Rumbaoa and Florence Campbell Rumbaoa.  On March 13, 1965, he was married in Benton, Arkansas, to Kathi Buchanan.   He loved his wife very much, they were best friends.  Mr. Rumbaoa was a veteran, having served in the United States Air Force.  Before his retirement, he was an OSHA Instructor for Anheuser-Busch.  He attended college at University of Missouri and played Mizzou football for three years; he was a member of Kappa Sigma.  Sam was a pitcher in the minor leagues with the St. Louis Cardinals.  He loved to play golf, travel with his wife, spend time with his grandchildren, his fur babies and drive his ’62 corvette.  He also loved cooking his secret recipe for chop suey for his family and friends.  Mr. Rumbaoa loved life to the fullest, he never met a stranger.  He was of the Lutheran faith.

His parents preceded him in death.