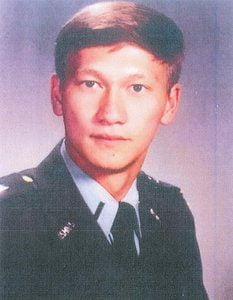 SFC Ross was called to be with our Lord after a brief battle with lung cancer on November 19, 2018, with his loving wife by his side/surrounded by family and friends. He was born on November 20, 1960, at Fort MacArthur Army Hospital in San Pedro, California to Leslie Wayne Ross and Yoo Ja (Lee) Ross; SFC Ross was a proud member of the West Plains Zizzer Class of 1979 where he was blessed to meet Christine Daniels (Zizzer Class of 1980) who would later become his lifelong wife of over 35 years.

SFC Ross joined the Army in February 1980 and served at various posts in Kansas, New Jersey, Washington, Massachusetts, Arizona, California, Texas, and Hawaii, where he was proud to serve beside some of the best soldiers, sailors, airmen and marines in the entire world.  SFC Ross concluded his military career as a POW/MIA Investigation Team Leader and Vietnam Refugee Debriefer, traveling extensively in Thailand, Hong Kong, Macau, the Philippines, Vietnam, Laos and Combodia.  At the time of his retirement, he was credited with being “the most accomplished and respected POW/MIA investigator in the Department of Defense”.

Following his military career, the Ross family settled in Houston, Texas, where SFC Ross was employed at LyondellBasell Industries in Channelview, Texas. Over a twenty-one year period with LyondellBasell, SFC Ross served in various roles as a security guard, worldwide electronic security system administrator, and security supervisor. He retired from private industry on November 1, 2016, in order to spend more time with his family and friends.

Burial will be at the Free Union Cemetery, Leota, Missouri.  Memorial contributions may be made to the American Cancer Society and left at Robertson-Drago Funeral Home.