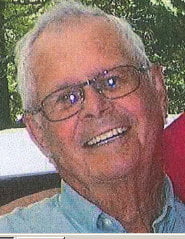 Mr. Alvis died 12:38 p.m., Friday, February 15, 2019 at the Ozarks Medical Center.  He was born August 5, 1936 at Geary, Oklahoma to William Solon Alvis and Bertha Louise Allen Alvis.  He graduated from the West Plains High School with the Class of 1955 and on May 10, 1957, he was married at Moody, Missouri to  Fern McClellan.  Before his retirement, Mr. Alvis had been employed at the International Shoe Company, had been a road grader for Howell County and was a  farmer in the Pomona area which he enjoyed.  Mr. Alvis also loved spending time with his grandson and great grandchildren and  Cloud 9 Ranch.  He was of the Baptist faith with his membership in the Forest Dell Church.

His parents, a great-grandson, Brody River Barry, his brother, Elmer Alvis and his sister, Margaret Alvis, preceded him in death.