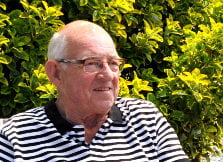 He was born September 5, 1936, at Princeton, Illinois, to Leslie Frederick Becker and Dorothy Jean Stoughton Becker.  On September 26, 1958, he was married at Compton, Illinois, to Carolyn Weiler.  Mr. Becker was a veteran, having served in the United States Army.  Before his retirement, he worked as a truck driver for over thirty years.  He enjoyed fishing, feeding birds and loved his family.  Mr. Becker was a member of the Immanuel Lutheran Church.

His parents, one daughter, Shelli Jolliff, one sister, Ruth Ann Zweep and brother-in-law, Doug Schmidt, precede him in death.