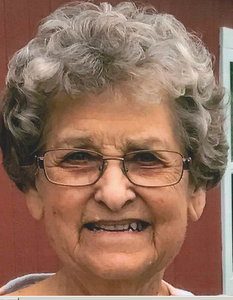 Funeral services for Shirley Ann Jett, 79, Koshkonong, Missouri, will be held at 2:00 p.m., Monday, October 1, 2018 at the Rover Faith Tabernacle Church under the direction of Robertson-Drago Funeral Home.

Mrs. Jett died 9:40 a.m., Friday, September 28, 2018 at her home.  She was born July 28, 1939 at Rover, Missouri to Alva Judd and Alice Bridwell Judd.   She was married on September 19, 1956 at Rover, Missouri to Sammy Jett who preceded her in death on October 8, 2000.  Mrs. Jett graduated from the Thomasville High School with the Class of 1957.  Before her retirement, she was employed at Richard Brothers Meat Department and Dennis’s Meat Market.  Mrs. Jett loved to bake, enjoyed making quilts and was a strong supporter of her community.  She was a member of the Assembly of God and attended the Rover Faith Tabernacle Church.