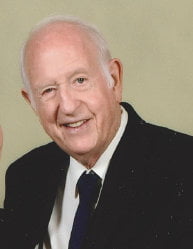 He entered into eternal rest on July 2, 2019 in West Plains, Missouri.  Mr. Bowden was born March 23, 1936 in Kansas City, Missouri, the son of the late D. C. Bowden and Helen Lemons Bowden.

Mr. Bowden was a business man and community leader in Birch Tree for many years.  He served several terms as president of the Chamber of Commerce and of the City Board, was a leader for the Royal Ambassadors’ youth organization, and was appointed as a Deacon in the First Baptist Church in Birch Tree.  Later in his career, he became involved with Missouri Community Betterment and received the title of Missouri Ambassador for Life in 1993.  He worked as chief loan officer and vice-president for the Bank of Birch Tree, an institution established by his grandfather, Charles Bowden, in 1911.

On December 26, 1987, he was married to Janice Lafevers Langston in West Plains, Missouri.  After their retirements, Keith and Janice became world travelers, visiting 108 countries, the latest one in February of this year.  Keith and Janice also worked as CASA volunteers for ten years and received the Dea Daniel “Hall of Fame” service award in 2018.  Keith was a member of the First United Methodist Church in West Plains, Missouri and established a church scholarship fund in 2008 for college students and women returning to education.  He was also instrumental in the development of the FUMC columbarium in the church prayer garden.  He was a member of the Seeker’s Sunday School Class for many years.

Visitation will  be from 1:00 until 2:00 p.m., Saturday, July 6th, at Robertson-Drago Funeral Home.  In lieu of flowers, contributions to the following charities would be welcomed: 37th Judicial CASA, the Alzheimer’s Association, the First United Methodist Church Scholarship Fund, the Greyhound Pets of America  or a charity of your choice and may be left at Robertson-Drago Funeral Home.

Mr. Bowden will be laid to rest in the First Untied Church Prayer Garden Columbarium at a future time.